Places To See in Kodaikanal 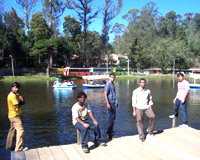 The picturesque hill station of Kodaikanal is often referred as the "Princess of Hill Stations" in India. Kodaikanal offers some great tourist attractions which appeal to the interest of one and all. There are some waterfalls and lakes that are worth visiting in and around the town. These places serve as perfect picnic spots, providing the right setting for relaxing. The high rising mountains, surrounding Kodaikanal, offer haunting images of clouds settling upon them, with lush expanse of flora around. The foggy weather, the cool breeze and the lingering locales, leave you asking for more.

Kodaikanal Lake
The main attraction of the hill station is undoubtedly, the star shaped artificial lake, situated in the heart of the city. Renowned as Kodaikanal Lake, it covers an area of about 60 acres and is the pulsating center of the town. Being surrounded by a wide footpath along its edges, the lake is the hub of all leisure activities in the town. The activities popular at the lake site are horse riding, boating, strolls etc.

Bryant Park
Bryant Park is located on the eastern side of Kodaikanal Lake. It is essentially a botanical garden, which was planned and landscaped by a British Army Officer, Mr. Bryant. This gave the park its name. Being a producer of diverse flower species like roses and lilies, it is a significant center of horticulture activity. Every year, a horticulture show is organized here in the month of May, which attracts many visitors. The show exhibits varied flowers, fruits, vegetables and even provides education regarding the same.

Flora Museum
Flora Museum is located at the Sacred Heart College in Kodaikanal. It is a must visit spot for the tourists, especially nature lovers. The "Orchidarium" here provides an opportunity to witness a collection of more than 300 species of orchids and other exotic plants that have been meticulously collected in and around Nilgiris.

Astrophysical Observatory
The Astrophysical Observatory is located at the highest point of Kodaikanal. It is primarily a research center in meterology and solar physics. Built in 1889, the observatory allows the tourists to witness the planetary movements of celestial bodies. It even houses a museum, which exhibits models illustrating complex scientific phenomena.

Kurinji Andavar Temple
Kurinji Andavar Temple is located at a distance of 3 km from the lake. The small shrine has been built essentially in the Pallava style and is dedicated to Lord Muruga. In Tamil, "Kurinji" means hill region while "Andavar" means God. Thus, Lord Muruga is referred as the God of Hill here. Besides, it is also famous for Kuranjini flower, which blossoms once in twelve years.

Pillar Rocks
Pillar Rocks are located around 7 km from the center of the town. These are basically three stones, which uniquely jut into the sky up to a height of 400m. Holding a mini garden, it proves to be an ideal location for witnessing gleaming sunsets and poignant night view of the city.

Coaker's Walk
Coaker's Walk is a steep pedestrian path, which was constructed by Lt. Coaker. It runs parallel to the lake for about one and a half kilometer. It is the best place for witnessing the breathtaking views of the valley.

Dolphin's Nose
It is situated at a distance of 8 m from Kodaikanal's bus stand. It is flat rock which projects over an unfathomable gorge. This is known as the Dolphin's Nose. One can enjoy impressive views of plains, steep, rocky cliffs known as Rolling Hills.

While visiting Kodaikanal, you can extend your tour of Tamil Nadu and visit nearby tourist attractions, such as, Madurai, Rameswaram and Kanyakumari. Madurai is known as the City of Temples. Popular tourist attractions in Madurau include: Meenakshi Amman Temple, Thirumalai Nayakkar Palace and Pazhamudircholai. Rameswaram is one of the most sacred Hindu pilgrimage destinations. According to legend, this is the place from where the God Rama built a bridge, across the sea to Lanka. Kanyakumari is the meeting point of Arabian Sea, Indian Ocean and Bay of Bengal. It's the southernmost tip of Indian mainland. Some of the popular tourist attractions in Kanyakumari are Thiruparankundram Murugan Temple, Kumari Amman Temple, Vivekananda Memorial and Thiruvalluvar Statue.